Mercedes-Maybach S-Class Get Flung Around the Nurburgring

Watch the Big Mercedes-Maybach S-Class Get Flung Around the Nurburgring By Chris Tsui, The Drive  21 hrs ago LikeComments The natural proving ground for purpose-built sports cars and hunkered-down performance sedans and SUVs, the Nurburgring isn’t typically where you’d find big, cushy land yachts like the new Mercedes-Maybach S-Class, but yet here we are. Spotted moving around the Nordschleife quite briskly for some odd reason is just that, Maybach’s latest and greatest sedan. 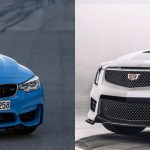 Things are starting to heat up as we near the Geneva International Motor Show. Many automakers will be debuting their latest and greatest, trying desperately to one-up each other. One car maker that is choosing to do a little nose-thumbing at its competition is Cadillac.

Cadillac will be debuting its new CTS-V and ATS-V at the Geneva Motor Show and decided to take a little road trip, before finally stopping in Geneva, to do some trolling. Before Cadillac gets to Switzerland, it made various stops throughout Germany, at each German carmakers’ headquarters to take some pictures. Each picture, posted to Twitter, is of either a CTS-V or an ATS-V at one of the big German carmakers’ headquarters, with some sort of witty caption.

First stop was at BMW’s M Division, obviously, and parked next to an Austin Yellow Metallic M3 is a Black Cadillac CTS-V. I think the CTS-V is going to be a good [...]